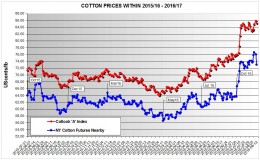 In 2015/16, significantly lower crops in the five largest producing countries (76% of world output) and higher than expected demand led to tighter stocks at the end of 2015/16, at which time world ending stocks were estimated to have fallen by 12% to 19.7 million tons. International cotton prices jumped to over 80 cents/lb in the second half of July 2016 from an average of 70 cents/lb for the rest of the season. In 2015/16, China’s cotton production declined by 26% to 4.8 million tons, as reduced subsidies and competition from other crops discouraged farmers from planting. Cotton mill use in China decreased by 2% to 7.3 million tons, but exceeded production by 2.5 million tons.

In 2016/17, world planted area is expected to expand by 1%, to 30.7 million hectares, while yields are forecast to rise by 7%, to 746 kg/ha. As a result, world production is predicted to increase by 8%, to 22.9 million tons. Gains in India, the United States, Pakistan and Brazil will offset the loss of production in China in 2016/17. Better cotton prices during the growing season will encourage farmers to use more inputs, such as fertilizer, in order to improve yields and take advantage of higher prices. In addition, weather has generally been more favorable this summer than in the previous one. India’s cotton production is projected to increase by 8%, to 6.2 million tons, as yield improves by 7%, to 518 kg/ha. The area under cotton in the United States expanded by 10%, to 3.6 million hectares, due to better cotton prices relative to those of competing crops. The average yield is expected to grow by 8%, to 929 kg/ha, and production by 19%, to 3.3 million tons. High production costs limit Chinese farmers’ enthusiasm to plant cotton despite higher prices in the current season. China’s production is forecast to decrease by 3% to 4.7 million tons. Pakistan’s cotton production is projected to increase by 20%, to 1.8 million tons, as yield recovers by 27% and reaches 669 kg/ha.

Although world production is expected to increase in 2016/17, consumption is projected to remain stable at 23.9 million tons. Mill use in China, the world’s largest consumer, is forecast to decrease by 3%, to 7.1 million tons, due to high cotton prices, low polyester prices, and limited imports. However, mill use may stage a modest recovery in India and Pakistan, where consumption is projected to increase by 2%, to 5.3 million tons, and by 1%, to 2.2 million tons, respectively. Meanwhile, cotton mill use in Turkey, the fourth largest cotton consumer, may decline by 1%, to 1.4 million tons.