71th Plenary Meeting of the ICAC 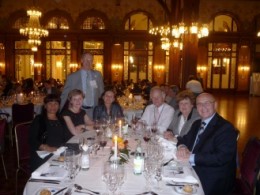 The meeting was attended by the official Polish delegation composed of:

The leading theme of the Session were issues related to the sustainable economy – its title was “Shaping Sustainability in the Cotton Value Chain”. As in the previous years, the ICAC works were undertaken during the plenary, open, and breakout sessions. In total, there were 3 Plenary, 6 Open, and 6 Breakout Sessions. Parallel, there were also technical sessions and meetings of a number of expert organisations and task groups which are active within the ICAC. Moreover, the Polish delegates took part in the sessions of the Private Sector Advisory Panel, Task Force on Commercial Standardisation of Instrumental Testing of Cotton, International Forum for Cotton Promotion and in other ones, which dealt with the production, processing, trend analysis in the cotton sector as well as with cotton promotion.

Mr Alois Schonberger (Cottonex Anstalt) – Vice President of The Gdynia Cotton Association, was unanimously elected the Chairman of the Private Sector Advisory Panel for the next term of office.

Mr Zbigniew Roskwitalski – Executive Vice President of The Gdynia Cotton Association was again elected the Rapporteur of the Task Force on Commercial Standardisation of Instrumental Testing of Cotton.

During the session of the International Forum for Cotton Promotion, Mr Zbigniew Roskwitalski presented a short report on the continuation by the GCA of the promotion activity in respect of increase of cotton consumption, plans and marketing success in the field of popularisation of cotton as a natural and customer-friendly raw material. The report delivered by Dir. Roskwitalski was a summary of his activities as an outgoing IFCP President.

The participants enjoyed the IFCP exhibition stand where the Polish Pure Cotton Emblem and the International Cotton Emblem (licensed together with the Bremen Cotton Exchange) – both of them licensed by the GCA were presented. Also, Polish companies which were granted the ICE licences were presented.