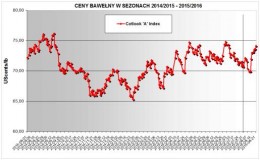 World cotton area contracted by 8% to 31.2 million hectares. Adverse weather in many countries led to the world average yield decreasing by 7% to 711 kg/ha.

In 2015/16, world cotton imports are likely to decrease by 3% to 7.4 million tons with imports by Vietnam, Bangladesh and China all projected at 1.1 million tons each. This represents 44% of world imports. The United States will lead in cotton exports despite reducing export volume by 12% to 2.1 million tons. India’s exports are expected to recover by 22% to 1.1 million tons. In 2016/17, world trade may increase 3% to 7.6 million tons.

In 2016/17, poor returns for competing crops and relatively stable cotton prices may encourage farmers to plant more cotton, and cotton area may expand by 1% to 31.9 million hectares. Modest increases in cotton area in India, Pakistan and the United States are expected to offset losses in China, Brazil and Uzbekistan. World cotton production is projected to increase by 3% to 23 million tons in 2016/17.