Exhibition devoted to cotton, in the Museum of the City of Gdynia 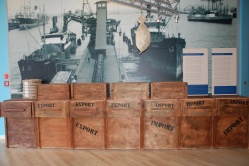 Thanks to the Gdynia Cotton Association efforts, an exhibition devoted to cotton imports through the Port of Gdynia before the WW II has been installed in the Department of City and Port Documentation.

Among general cargoes, cotton imports were characterised with the greatest upward dynamics thus contributing to the development of the city and the port. A wise policy of the 2nd Republic authorities’ and quickly developing infrastructure of the port in Gdynia made that since 1935 all imports of cotton to Poland had been passing through Gdynia and not through Bremen and Hamburg as it was practised earlier.

Cotton imports through the Port of Gdynia: